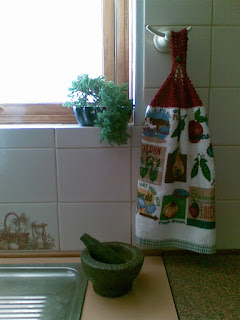 This week I had a 'Tea Towel Party' with my neighbour Adrienne. You should have seen us–two grown women getting excited about a bunch of tea towels!

These were not ordinary tea towels though...


These tea towels would become kitchen hand towels, of the type you are bound to have seen somewhere before–a shop-bought tea towel with a crocheted button-up top to conveniently attach to a towel rail or cupboard door handle etc.

It wasn't the tea towels alone that excited us, but the crocheted 'tops' which were a common motivator between us for learning to crochet in the first place.The plain truth is: if we want one, we need to make our own, or find someone who can make one for us. (The latter turns out to be not as simple as it sounds because the crocheted ones are not readily available in shops.)

With a pot of tea and fine china for sustenance, my tiny lounge room was gradually consumed with a spread of tea towels (finished ones and new ones awaiting crochet), a rainbow of cotton thread in various weights, scattered pages of pattern diagrams and folders and books, as our animated chatter drowned out the TV cricket commentary.

We talked about reasons for making tea towel tops and the benefits, compared suitable yarns, patterns and colours. We examined different styles of tops to gain a general understanding of the construction techniques for reducing the stitch counts of each row to make a pleasing tapered shape. We shared hints and tips in the making and discovered the ways in which different viewpoints affect the approach and method(s) used to make tea towel tops.

Many of the tea towels we see at fêtes and markets are made from a single tea towel cut in half to make two hand towels. They are obviously created with the cheapest method possible in mind. I despair at some of the horrid things that I see at fêtes: thin cheap tea towels from a discount emporium, towels that won't last a year, topped with cheap and nasty fluorescent acrylic (yes, acrylic! Instead of cotton! I wouldn't believe it either if I hadn't seen it with my own eyes!) in discontinued garish colours that have no relationship to the colours or designs on the towels. I ask myself, "Where are the aesthetic values?"


"Why should it matter?" some people ask, "You're only going to wipe your hands on them anyway. They are functional and they are cheap." The latter point irritates me–not just cheap in materials but cheap in price, selling for less than it costs to put them together; e.g. AU$5.00. (You would need to pay me to take one home when they are extremely horrid. Believe me, they are out there!). "Cheap and nasty" products at ridiculously low prices are a discredit to the art of crochet and devalue the beautiful work of other craftspeople who do 'give a stitch' about the quality of their products.


I love beautiful things and to have beautiful things in my home. If I take the trouble to make something for my home I make a special effort to design a top that is in harmony with the design on the towel. At least I bother to try and match the colours! Because I have spent energy on it, I want it to last so I will use the best quality towels I can find, and I will use one towel and double it over. That way, I can wipe my hands on the rear towel, leaving the front one for display. A doubled towel will service my kitchen twice as long as a single half. I also finish them off properly.

Then there is the dilemma of the time it takes to make individual designs for each towel. Is this unwise? After all the towels will not last forever, and yes, we "are only going to wipe our hands on them" so we don't want to spend too much time on them. Adrienne and I agreed that the answer is in the middle ground somewhere and what is best will depend on the needs and attitudes of the individual, and those differences are what make the world such a fascinating place.

These are some of the dilemmas pondered at our 'Tea Towel Party'. When it comes to starting tea towel tops, we debated the benefits of casting on with blanket stitch or double crochet stitches directly into the towel. Depending on how one starts the tea towel top, when the towel wears out it can be possible to detach the crocheted top and stitch it already complete onto a new towel.

I LOVE Adrienne's idea of 'priming' her towels first. Have you ever been in the mood to pick up a towel or other quick project to crochet only to be discouraged with having to get over the tricky starting hurdles, like carefully marking or cutting and hemming the item first, when you are just not in the mood for that level of detail? Adrienne's idea is to prepare a bunch of tea towels at one sitting when she is in the mood, with their first row all done so that when she feels like some quick crochet, it is all there ready for the hook.

As usual when we get together, we had a "Show and Tell" session which always inspires me, and while Adrienne diligently worked on another tea towel, my head was so full of ideas and choices that my indecision prevented me from picking up the hook at all during our session; but it wasn't for nought because our 'party' has revitalised my enthusiasm for fulfilling my New Year's Resolution to complete the stack of tea towels that has been waiting for attention for over a year!

You must view Adrienne's tea towels and read about her quest on her blog http://mrsski71.blogspot.com.au/2013/01/crochet-love.html. She has come a long way since first picking up a hook and her lovely work gets better and better!

Who would have thought that tea towels could create so much discussion? Here are the details... 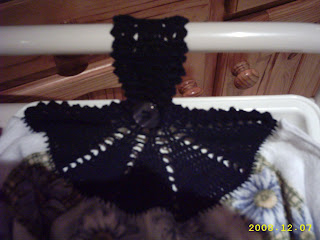 This was a long entry today, but I am passionate! Thank you for reading this far and I hope that you enjoy viewing our creations and are inspired to try some for yourself.