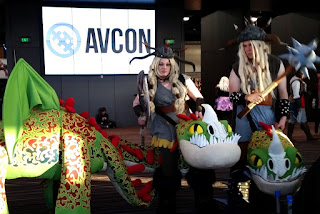 Last weekend was the weekend for pop culture festivals.

San Diego, USA hosted the massive Comic-Con convention and, at the same time, Adelaide, Australia had its own annual AVCon festival.

This festival just keeps on growing. This year, it spread across three levels of the Adelaide Convention Centre. There is so much to see and do that I highly recommend a weekend pass to make the most of it.

It can be broken down into 4 basic areas: anime, games, cosplay and related fandoms. You can view, play, buy, meet, listen and learn.  Entertainment includes special guests, panel forums, a quiz night and even a rock concert.


It's full of all sorts of gaming except for the gambling type: traditional tabletop gaming, role playing like Dungeons and Dragons, war gaming and video games old and new.  The room with vintage home TV games and consoles took me right back and made me feel old but it was also great to rekindle those memories and relive the excitement that I remember from when those game products were first released.

It's a place to meet and play with other like-minded gamers, on hand-held games, consoles and computers. Share the same machine or play across a LAN (local area network for multi-player games).  You can sign up to participate in tournaments too which are all free to enter.

AVCon hosted the finals of various eSports tournaments. Did you know that my favourite AFL footy team, the Adelaide Crows, has  a professional eSports team?  The team is called 'Legacy' and competes in the League of Legends Oceanic Pro League (OPL).


If you like to create your own games, AVCon gives an opportunity for independent and emerging game designers to show off their talents. My special interest was the 'Indie Games Room' where one of my loved ones showcased the anti-gravity racing game 'Ballistic NG'.


The game is available as a free Steam download. Steam is an online gaming community and game distribution platform.  Anything sold or distributed on Steam needs to be approved and Ballistic NG was accepted. Yay!


If you would like to see samples of the games on show, have a look at The Indie Games Room's 2017 promotional trailer on YouTube.


AVCon artists, artisans and retailers come from across the country to sell their wares whether they be books, comics, T-shirts, props, costumes, figurines, games,
you name it!

Commercial merchandise was for sale in an Exhibitors Hall but AVCon also provides an avenue for people to sell their custom hand crafted goods as well.

Artists can enter their work in the AVCon Art Competition  and exhibition which has categories for traditional and digital art plus, this year, props!

The foyer of the Convention Centre became 'Artist Alley' where one could find all sorts of independently made products and meet their creators; e.g. badges, costumery, toys, artworks (originals and prints) etc. based around your favourite games, characters, TV shows or whatever your fandom might be.


I went on the hunt for crochet and found three different stalls selling crochet of various types, subjects and quality.  Links are included at the end of this post. Starting from one end of Artist Alley to another, this is who I found.


While chatting to Lauren, we were joined by one of her regular customers, Anissa who was wearing a black crocheted squid in her hair and it looked fantastic.

That black squid was also crocheted by Lauren and purchased in a previous year. It has been the perfect fashion accessory but now Anissa feels that she needs a new one.

Anissa was also an AVCon Invader (part of the volunteer team) and I met her later in the day as she welcomed visitors to the Console Free Play room in the Games Hall.

I hear that there are some very serious and competitive cosplay conventions around. I believe the international ones like Oz Comic-Con have lots of very strict rules for professional and experienced cosplayers but Adelaide's AVCon maintains a fun and inclusive atmosphere.


This year, I watched the Cosplay Parade. There were many amazing costumes from serious cosplayers but there was an open invitation for anyone with a costume, either home-made or store-bought to have their time in the spotlight on the catwalk.  It was so much fun to see people braving the stage to show off their costumes and their adopted personas.

I always try to attend at least one panel forum at events like AVCon and this year, I stuck with the cosplay theme and attended "Beginners Guide to Cosplay".  You never know what handy hint you might glean from such things and even though I am not a cosplayer, a lot of the shared knowledge can apply to crochet and knitting as well as sewing and costumery.

My one personal disappointment from the day is that I did not get a chance to sit back at one of the many anime screenings which were being run right through the day in four different theatres.  I was looking forward to ending the day relaxing with a movie but I couldn't last that long. The fatigue was starting to hit me so I needed to race home before I fell in a heap!

My only criticisms are logistical ones. As a concession holder, one was unable to purchase concession tickets in the pre-sales but needed to purchase at the door on arrival which involved standing in queues.

Cosplayers who had registered to participate in the parade had a marshalling area where they could change in and out of their costumery.  I discovered that members of the public who did not wish to wear their costumes in transit were using the disability access toilets as changerooms which meant that it was difficult to find a free toilet when I needed one.

Had these cosplayers asked the AVCon staff, they would have been welcome to use the marshalling area but this was not publicised.

In the end, I could wait no more and I needed to wheel to the other side of the building before I could find a vacant accessible toilet!  The organisers have been made aware of this.

Otherwise it was a full and fun day. Please remind me next time to get a Weekend Pass instead of a Single Day!

Have you ever been to a pop culture convention?
Do you like to cosplay?
How about video games?

P.S.  AVCon is a great place to run into friends.

On arrival, I was greeted by a volunteer and who should it be, stationed at that door, but Loren (a.k.a. Kitty Emporium), our 'neighbour' from Maker Faire!  What a small world.

Later in the day, I caught up with Craig (old friend and one of my Maker Faire support team members) who was on duty at AVCon's St. John First Aid station. We couldn't help but remark on the 'authenticity' of his paramedic 'costume'.