Last night, my family and I were greatly saddened to learn that the well-known and well-loved crocheter and blogger Marinke Slump of A Creative Being had lost her battle with depression.

This morning, I woke to the news that Phil Walsh, Adelaide Crows' coach, had died suddenly overnight in tragic circumstances.

Marinke Slump, author of the book Boho Crochet: 30 Hip and Happy Projects, also known fondly as 'Wink', had contributed so much to the crochet world, not just in her generous sharing of beautiful mandala patterns but also by being brave enough to share her experiences with depression.

Two weeks ago, her blog revealed that she was in a very dark place; despite the multitude of messages of support, it was not enough to save her and this week her sister had written the sad news that Wink had taken her own life.

Many bloggers are posting tributes and I am sure there will be many more to come over the coming days and weeks.

Her family have set up an official memorial site where friends, fans and followers can view a photo gallery and share their memories and stories of Marinke.

Marinke was a contributor to Kathryn Vercillo's book, "Crochet Saved my Life" and my heart goes out to Kathryn today as she has lost a friend with whom she could relate in regards to both crochet and the daily struggles with depression.  My condolences are also felt for Wink's family, friends and everyone who knew her or was touched by her. Kathryn wrote a beautiful tribute and summary of Marinke's contribution to crochet community.

One of the ways the crochet community is coping and showing its respect is by creating mandalas for Marinke.

There is an online memorial project called #MandalasForWink which wants to cover the world with mandalas to celebrate Marinke's life and spread the beauty around the world. If you have made a mandala, and especially if you have made one from one of Wink's pattern's, take a photo of it and post it on any social media site with the hashtag #MandalasForWink.

Kathryn Vercillo is also facilitating a #MandalasForMarinke collaborative art project to "celebrate her life and creativity as well as to raise awareness about depression. Kathryn has posted an information page on Crochet Concupiscence for those who would like to get involved.

Annemarie Benthem, contributor to Marinke's book and owner of Dutch blog Annemarie's Haakblog and regular link party host, is inviting crocheters to share their mandalas on this Saturday's "Link Your Stuff" page. My thoughts are with Annemarie today as well.

Refer to the lists at the end of this post for further links to tributes and this project.

Adelaide is waking up to the news that the Adelaide Football Club's coach Phil Walsh died overnight.

I first heard a radio report very early in the morning that police had been called to a domestic dispute where the occupants of the home had been stabbed - a horrifying event for anyone. At that point I had no idea of the people involved or the circumstances but it occurred in a part of Adelaide that is close to me; I travel through that area almost daily and was working out my route to avoid trouble and also waiting to find out whether the perpetrator was still at large because I have school children that walk in that area too.

By 7:30 a.m. the news had come through that it was Phil Walsh who had been stabbed by his own son!  The ambulance personnel were unable to resuscitate him and he died from his wounds.  His wife was also wounded and taken to hospital.  Their 26 year old son, who normally lives with his parents, had returned home in the early hours of the morning and that is when the dispute occurred. He is now in hospital under police guard awaiting psychiatric assessment.

The entire city is shocked and stunned.  The entire football community around Australia equally so. Phil Walsh is a highly educated and articulate man, who is well-liked and has contributed a lot to football as a player and coach and has been associated with many clubs over his career.

As I type, there are meetings all over Australia where officials are deciding whether to cancel this week's round of football.  Other people are suggesting that Phil would have wanted the boys to play in his honour.  I cannot imagine how the boys would be able to play immediately after this loss. Perhaps they should be the ones to make that decision. 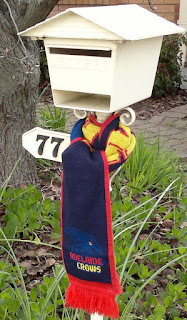 Supporters are showing their respects by placing tributes at the Walsh home and also at the gate to Adelaide Oval.  I have wrapped one of my Crows scarves around my letterbox to show my respects as are a lot of Adelaideans. At times like this, people's football rivalries are put aside to support one another.  It is heartening to see messages of condolence from members and fans of other clubs towards the Walsh family and Adelaide Football Club.

This event has heightened public discussion about domestic violence and mental health issues.  The Federal Government reduced funding to many prevention and support services in their most recent budget much to the dismay of many.

My friends and readers of Lupey Loops would know that I am a loyal supporter and member of the Adelaide Football Club. That is why I am posting about this even though it is not directly related to crochet (apart from the fact that I like to crochet at the footy).

The game on Sunday between Adelaide and Geelong has been cancelled and both teams will receive 2 points each.  The remaining games of the round will still be played.

I will end this now so I can get it posted. I will leave you to follow news as it unfolds. The links in my list below are starting points to find information.

I hold a special concern for anyone who is dealing with depression while trying to come to terms with these losses.  Please, be kind to yourself, take special care of yourself, and make an effort to reach out and talk to someone about your feelings.  Depression is a hidden demon. It might be a good day to check in on those you love and ask, "Are you okay today?" for you never know who is also battling on the inside to keep it all together on the outside.

It is okay to express grief openly - let it out. Better out than in, I say, but if you feel that you cannot lift yourself out of a dark place, or cannot cope, it is important to seek help. I will add some Australian resources to my reference list today.

Are you okay today?
How are you going?

The game between Adelaide and Geelong which had been scheduled for Sunday 5 July, was cancelled. Instead, over 20,000 supporters of all codes and colours congregated at Adelaide Oval to show their respects to Phil Walsh.

My family travelled into the city for this event but I did not go because I was sick and did not want to go out into the cold.

People filled the southern stand and it overflowed along the side stands of the oval. It was a subdued atmosphere as everybody came together to support each other in grief and shock.

The scoreboard displayed a slide of Phil Walsh as everyone stopped to observe a minute's silence in his honour.  The sounding of the starting siren broke the silence and with a round of applause and appreciation, people streamed onto the oval to have a kick of the footy because Phil Walsh was passionate about footy. Everybody says that is what he would have wanted–for people to reap the enjoyment of footy as he had done.

The old scoreboard carried the message:


Dianne, of blog Adelaide and Beyond, has posted a beautiful photographic tribute: http://adelaideaz.blogspot.com.au/2015/07/adelaide-crows-fitting-tribute.html

Most of the services and resources listed below are for people in Australia only.

Beyond Blue: https://www.beyondblue.org.au/
Phone support service: 1300 22 4636 24 hours a day, 7 days a week.
Chat online: 3:00 p.m. to 12:00 a.m. (AEST*) 7 days a week.
Email for a response in 24 hours: https://online.beyondblue.org.au/WebModules/Email/InitialInformation.aspx
An Australian national initiative to raise awareness of anxiety and depression, providing resources for recovery, management and resilience. See also Youth Beyond Blue (below).

Evans, Kate, "In Memory of Wink", Simply Crochet magazine, online article, UK, 30 June 2015: http://www.simplycrochetmag.co.uk/2015/06/30/memory-wink/
This article has information about how to identify depression plus support services and resources for suicide prevention.

Beyond Blue's dedicated site for youth. Information, resources and support for young people dealing with depression and/or anxiety.


Evans, Kate, "In Memory of Wink", Simply Crochet magazine, online article, 30 June 2015: http://www.simplycrochetmag.co.uk/2015/06/30/memory-wink/
This article has information about how to identify depression plus support services and resources for suicide prevention.

Slump, Marinke, "Mandala (EN)", crochet pattern, A Creative Being: http://www.acreativebeing.com/patterns/mandala-en/
This is Marinke's photo tutorial to make a basic mandala. Pattern instructions are in English.