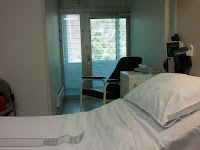 A day in hospital need not be boring, especially with hooks and needles in tow!


My half-yearly review blog entry (30 June 2015) referred to a hospital visit and this was it: a planned admission to administer an iron infusion.*

That's where I get hooked up to a drip for hours and hours to replenish the body's iron stores.  It is not a quick fix–it takes up to a month to rebuild the red blood cell count–but I must admit that I was already feeling brighter after only 48 hours.
An infusion also comes with some risks of serious complications so it requires one-to-one nursing through the initial stages. That means having a nurse at my bedside and being under continual observation for much of the time.


Not to worry! I was prepared with my big orange hospital bag filled with crochet hooks and scarf projects and even my little laptop computer so I could read crochet magazines electronically.  I was also blessed to have a very close friend arrive with her knitting needles, wool and knitted scarf project.
('Tis officially the season of the scarf!)


A second friend who had been 'on standby' had a last minute change of plan and was sadly unable to join us (almost had a craft triangle!) but that didn't matter–there was enough yarncrafting and conversation between the three of us (me, my friend Cheryl and  Nurse Louise) to help pass the time and distract me from any anxieties.

You may know Cheryl from the blog MummyCook where she shares her recipes and solutions for cooking for children with multiple severe allergies and food sensitivities.  She is also great at sewing and knitting.

While my room and the infusion solution were being prepared, we spent much of the morning in a light and bright private lounge area where we could enjoy a cuppa and craft without disturbing other patients with our excited chatter.

On this particular day, scarves were 'the thing'.  Cheryl was knitting a floral keyhole scarf and I was working on another silk mohair scarf and continuing an alpaca stripy scarf.

It had been a long time between get-togethers so we had a lot to catch up on and chat about.  We always find something to giggle at, even if it isn't especially funny–like poisoning our tea when the supplied plastic spoon melted in the boiling beverage! Never mind, making a second cup helped to pass the time and provide new opportunities for fun. Laughter is an excellent stress reliever.

Soon it was time for the infusion and we were shown to a modern single room with plenty of room to manoeuvre my wheelchair and a view to the trees outside.  I do like a view when I am in hospital. If I can see nature, it really helps me meditate and stay calm. The nurse pointed out that the floor to ceiling window was actually a door to an outside balcony which we were welcome to use, but since it was winter, we declined the invitation.

That's why I get excited to see the access message getting through.
I was so excited to let my friends know that I took photos …


Back to the important craft news: scarves!

Have you ever found a pattern that you love
so much that you return to it again and again?

Cheryl fell in love with a great little keyhole scarf pattern by Bernat.  She loves it because of the floral embellishment which adds so much style and looks complicated but (and we'll keep this to ourselves) it's really quite simple to knit.


I love keyhole scarves because they keep the neck  warm while keeping the chilly breezes off the chest but they are not too long and dangly that they get in the way of activities. Strangely, I haven't got around to making one for myself yet!

On busy days, I like to wrap regular scarves multiple times around my neck so they are not too long. If I forget, I have to catch my scarf ends before they dip into the dishwasher as I lean down to empty it or, even worse, to put dirty dishes in!

Brrr! That's a horrible scenario. I am shuddering at the thought!

Which keyhole scarf patterns would you recommend?


My alpaca (non-keyhole) stripy scarf is nearly finished.  It is a pattern by
Prudence Mapstone from her workshop about double-ended crochet hooks.

The scarf uses a tricot technique (a.k.a. Tunisian) so it works up quickly.
The double ended hook allows one to swap colours easily without carrying strands (or floats) along the sides and creates a double-sided, reversible pattern.

I am planning a fun trim for this scarf and am eager to finish it so I can wear it.
The alpaca is so soft and warm!

Cheryl observed that I spent a lot of time crocheting stripes only to undo them all again!  I kept spotting mistakes so by the end of the day, I was not much further along than at the start.  That's what fatigue will do for you.  It didn't matter because the aim was to keep my brain distracted and pass the time enjoyably (which we did).

After all that activity, it was time for serious napping.  It may not look or feel like much effort to be sitting around and laying in a hospital bed but I am sure the body works hard to adjust to treatments etc. because I was suddenly very tired and needed sleep.

Cheryl had a break and went for a walk while I slept. When I woke, there she was, knitting quietly and wow! She had almost an entire scarf on her needles, all done in one day!  Now that's an efficient pattern (and speedy knitter too).

Meanwhile, the infusion continued through dinner and into the evening until it was finished at last.  The staff were careful to make sure every last drop went through because I need all the goodness I can get.

I am so lucky to have good friends like Cheryl and her family who were very patient with the whole day which went longer than expected. (I am sure the term 'patient' came from hospitals where there is always a lot of waiting.)

Cheryl was kind enough to drive me home and her family were generous enough to let her stay with me for the day.

The hospital staff did a brilliant job of taking care of us.  After having traumatic experiences in the past, it was a relief for everything to run smoothly without any problems; and the best part?  Feeling so much better!


Many thanks to Cheryl and family, and the hospital staff, especially Nurses Anne-Marie, Sharon and Louise
for making a difficult day so easy.


*Why an iron infusion?


My mixed connective tissue disease (MCTD) manifests in many ways, one of which is a malabsorption syndrome.  This gets worse when the body flares up and interferes even more with the digestive tract's functioning.

When most people have a nutrient deficiency, the answer is to fortify the diet and take supplements. When these nutrients cannot be absorbed by normal digestion, they have to be administered by other means such as injections and infusions.


I suspect the over-activity of the first half of 2015 is partly to blame because there was insufficient recovery time between setbacks. Some of those setbacks included internal bleeding caused by adenomyosis and endometriosis (two of those "difficult-to-spell conditions with really long names!" alluded to in my very first introductory post on this blog).

Eventually, I developed iron deficiency anaemia–no wonder I was tired!